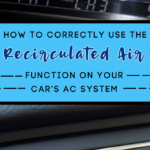 You know that little button on your car’s air conditioner — the one that can recirculate the air inside your car?

Did you know there is actually a use for it — a specific time when you are supposed to use it?

It is up near ninety degrees outside at my house today — is it bad that I’m ALREADY ready for fall?

If there’s one thing my car has that I’m so thankful for, it’s an air conditioner that blows COLD air!!

But, I didn’t know there was actually a USE for that little recirculate air button.

Apparently, I have been using it all wrong!!

I just kind of keep it on recirculating air — that means it pulls the air from inside the car’s cabin back through the AC system — all of the time.

Turns out — I’m only using it correctly in the summer!

See, when it’s HOT outside — during those MISERABLE summer months, when it feels like it’s as HOT as the surface of the sun — you are supposed to use the recirculated air, because it’s already cooled air.

It’s less work for your air conditioner in the car to use the already cooled air, instead of that steamy hot air from outside.

Using the recirculation feature will get your car cooler and will decrease the wear and tear on your AC system.

When that temp drops, and it gets cooler outside, you are supposed to click that little recirculated air button, turning the recirculated air OFF, and start letting the AC system pull the air from outside the car.

Now, there are definite exceptions to the rule when using fresh air during the cooler months.

If you are stuck in traffic, or stopped at a light, you want to turn ON that recirculated air button.

When you are pulling that outside air into your car, you are also pulling in all the exhaust fumes and pollution that’s in the air — you might have noticed you can actually smell things from outside when you have the recirculated air turned off.

Studies show that recirculating your AC can cut down on the pollutants entering your vehicle by 20% when stuck in traffic!

As a side note — during the summer months when temperatures outside climbs to 80 degrees to 100 degrees, the inside of your parked car can reach 130 degrees to 172 degrees!!

You don’t want to start blasting your air conditioner in the car as soon as you get in — you just may melt.

It’s better to roll the windows down and turn recirculate off for the first minute or so to get rid of the super hot air inside the car before turning the recirculate on.

So, to recap — during the hot months, turn the recirculated air ON.

Now, go out and enjoy your summer! Make yourself a Pomegranate Lemonade, and try to stay cool out there!