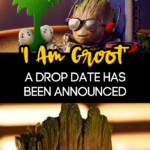 Groot is getting his own TV show on Disney+, and we just learned the release date.

Y’all, it’s going to be here before you know it, and I’m giddy!

I hate to admit it, but I used to pride myself in the fact that I had never seen Guardians of the Galaxy.

ALL the Marvel movies were in the same stupid boat in my mind. I don’t know why, but superhero movies just didn’t appeal to me.

I put Marvel in the same category with the Transformers movie franchise — which I also haven’t seen.

But then a little thing called COVID hit, and I was forced to stay home with nothing to do but binge watch movies.

The only reason I ever watched a Marvel movie was because my husband was also stuck at home. I still had to work, and he didn’t.

With nothing else to do (because you KNOW he isn’t going to do the laundry) he would stream Marvel movies while I wrote all the things.

It was weeks before I actually paid attention to anything he had playing on the TV.

It started one day while he was watching Thor: Ragnarok for the third time. I found myself staring at the TV, entranced by Chris Hemsworth the hilarity of the film.

He told me that I HAD to watch Guardians of the Galaxy next, and he was totally right.

I fell in love with a little tree they called Groot, and I found myself asking to watch the sequel just so I could see what happened to the little tree dude.

ALL THAT TO SAY, there is going to be an I Am Groot TV series coming to Disney+, and I can’t flipping wait!!

Marvel Entertainment took to social media to announce the drop date, and we are only going to have to wait a couple months to see it!

I Am Groot is going to hit the Disney+ streaming network August 10th!!

According to ComicBook.com, I Am Groot is going to be a cartoon series that focuses on “baby” Groot.

The series is made up of shorts that see Baby Groot getting into and out of trouble in a world of photorealistic animation.

Baby Groot just so happens to be my favorite of the Groots. He’s so stinkin cute, isn’t he?!?

Just like in the movies, Vin Diesel is going to lend his voice talents to help bring Groot to life.

You can bet that my butt is going to be sitting in front of the TV on August 10th, waiting to hear the words, “I am Groot.”

Incidentally, if you haven’t yet seen Thor: Ragnarok, it is the BEST. Taika Waititi, who directed the film, is now my FAVORITE director. He hit a homerun with this crazy hilarious film.

Bonus, the Thor: Love and Thunder premier is just around the corner!!

It is going to be a Marvel summer, and I can’t wait!!