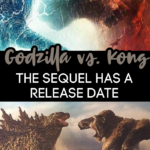 The war between Godzilla and Kong is getting a sequel, we knew this, but what we didn’t know was when the two would back on the big screen for a second film.

The good news? We finally have a release date!

Director Adam Wingard will be returning for the sequel as well as Dan Stevens who will playing the lead role in the monster film.

“I think Godzilla vs. Kong is the first time that we’ve really truly been able to have full sequences where the film leaves the humans and stays with the monsters, just like any other character,” Adam Wingard said to EW. “That’s a big breakthrough VFX-wise and even story-wise. If there’s another MonsterVerse movie, in my opinion, it should be the first full-on monster film. I would say, 30 percent humans, the rest monsters, basically flipping the formula of what a lot of these movies generally are. I think people are ready for it.”

While the first film briefly cracks open the door of the MonsterVerse, it’s fair to expect that the second film will include a deeper dive for mankind to explore what this world has to offer.

With production set to supposedly begin this summer in Australia, the release is set for 2024.

The release date for Godzilla vs. Kong will be available in theaters on March 15, 2024!