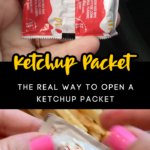 I was today years old when I found out that I’ve been opening ketchup packets wrong my whole life.

From my point of view, there are two ways to open a packet of ketchup: Tear the corner open, Tear the top off. Turns out, neither of those are the intended way that you are supposed to rip into ketchup.

What Is The Correct Way To Open A Ketchup Packet?

Tara “T” Ippolito is an at-home chef on TikTok. If you haven’t seen her TikTok page, go see it. OBSESSED.

She shared the CORRECT way to open a ketchup packet, and it makes so much sense.

See, instead of tearing off the corner — like I do — you actually open the packet all the way down the side.

I know, it seems unnatural, doesn’t it?!?

Ippolito starts her video by holding a ketchup packet up in front of the camera. There is a side of fries visible hanging out in the background.

I had no idea there’s a right way to open a ketchup packet.

Tara then proceeds to tear the entire side off the ketchup packet in one swift rip.

Turns out, opening the ketchup packet from the side makes the perfect little ketchup bowl in which to dip your french fries.

Did everybody know about this but me? It seems so obvious now that I know.

Is Tearing The Packet Down The Side The Intended Way To Open A Ketchup Packet?

If the comments on the post are the end all be all in deciding whether this is truly the intended way to open a ketchup packet, the universe is divided.

So, this may or may not actually be the OFFICIAL way to open a ketchup packet, but it’s one heck-of-a hack!! I’m going to eat my french fries like this from now on!