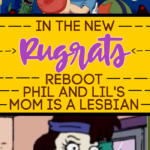 So, you know how in the original Rugrats cartoon Tommy Pickles had a set of friends who were fraternal twins — Phil and Lil?

They lived with their mom, Betty, who was married to their dad, Howard.

Well, this ain’t the case anymore!!

The brand new CGI-animated reboot of the Rugrats cartoon, which will air on Paramount+, shows Betty in her true identity, living life as an openly gay single parent.

This plot twist really doesn’t come as much of a surprise to quite a few people who watched the original show.

To many, she was already throwing out some major LGBTQ vibes.

Betty, who always showed up in her signature headband and sweatshirt, sporting that large female symbol, has “low-key always been a queer icon,” says the A.V. Club.

Natalie Morales, who will be voicing the part of Betty in the reboot, thinks this is an important move for the LGBTQ community.

She is an out queer individual herself, so she champions the opportunity to represent such a bold move on the part of the show creators.

Anyone who watched the original show may have had an inkling Betty was a member of the alphabet mafia.

But, it was just never made official in the original show — she had her boring husband, Howard, and that was it.

Betty is a single mom with her own business who has twins and still has time to hang out with her friends and her community, and I think it’s just so great because examples of living your life happily and healthily as an out queer person is just such a beacon for young queer people who may not have examples of that.

And yeah, Betty is a fictional cartoon, but even cartoons were hugely influential for me as a kid and if I’d been watching Rugrats and seen Betty casually talking about her ex-girlfriend, I think at least a part of me would have felt like things might be okay in the future.”

No word on if poor ol’ Howard will be in this reboot of Rugrats.

In this NEW CGI-animated Rugrats, Betty has a love for football, and owns a coffee shop known as Betty’s Beans — she always DID have an affinity for that dark, delicious nectar of the gods.

She is still boisterous and friendly, and she now openly jokes about her ex-girlfriends on the show.

I was such a big, big fan of Nickelodeon when I was a kid. Rugrats, Doug, Ah! Real Monsters, Hey, Arnold, etc. Like, I watched all of it and Rugrats was a big one. Walking into Nickelodeon studios and auditioning for this role was such a big deal to me that I framed the ID sticker they gave me at the gate. Getting the part was incredibly joyous and I pinch myself every time I get to do it.

See Betty, Phil, Lil, Tommy, and the rest of the Rugrats gang when Paramount+ premiers the NEW Rugrats cartoon this Thursday.