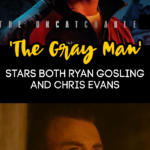 Okay, what? Ryan Gosling and Chris Evans are in the same Netflix movie? Sign me up right now!

Netflix has really stepped up its game, bringing a bunch of top notch original movies to the table.

Next to the true-crime dramas, my favorite of the Netflix films are the action packed ones!

The newest action film to drop on the streaming network as an original flick is The Gray Man.

As one of the most expensive original films to be released by Netflix, you can bet there are some top notch, “A” actors hitting the screen. My two favorites happen to be Ryan Gosling and Chris Evans.

Like, is it getting hotter in here, or what??

Did I mention, Ryan Gosling AND Chris Evans are in this film? *Heart Eyes Emoji*

You might be wondering what the heck The Gray Man is all about.

When the CIA’s most skilled operative [Ryan Gosling] – whose true identity is known to none – accidentally uncovers dark agency secrets, a psychopathic former colleague [Chris Evans] puts a bounty on his head, setting off a global manhunt by international assassins.

This spy-versus-spy film is based on the book series by Mark Greaney, which you can find on Amazon.

The Gray Man is a little different, because it was released in theaters — limited release — before it jumped to the Netflix streaming channel.

According to IndieWire, the film was made for the theater — like literally, it was filmed to be on the big screen.

That’s how we shot it, how we styled it and, on a technical level, how we supported it.

Joe Russo, part of The Russo Brothers — the duo who directed the film

Whether you saw it in the theater, or whether you waited until it dropped on Netflix, this movie isn’t one to be missed.

Did I mention both Chris Evans and Ryan Gosling are in it??