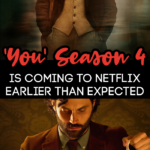 Netflix has just made a big announcement regarding the popular series of You, season 4.

While Netflix had originally announced that part one of the fourth season of the hit series would arrive on February 10 with several new episodes, apparently that’s not true anymore.

However, there’s now a new release date for the popular show.

And according to Netflix, the series will be released earlier than expected, classic Joe.

While Netflix hasn’t said why the series will come out earlier, we can’t complain that it is!

You season four, part 1 will release one day earlier on February 9!

Part two of You’s season 4 will drop March 9, only on Netflix!