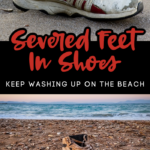 Over 20 sneakers have washed up along the coast of the Pacific Northwest, and these discoveries sort of dash my dreams of going to the beach in Washington state.

Washington state has ALWAYS been on my bucket list. Maybe I would have hung out in the Puget Sound. It even would have been fun to hang out in La Push or Forks like the werewolves in Twilight.

But, this little discovery has sort of dashed my dreams of walking along the seaside shore in a sweater and scarf in the middle of fall.

Since 2007, people have found at least TWENTY sneakers washed up on the beach.

But it’s what’s inside of those sneakers that is hella disturbing.

Severed feet. There are severed feet inside these washed up sneakers, and can you just imagine finding one of them? Yikes!

The most recent example took place on New Year’s Day in 2019 when beachgoers on Jetty Island in Everett, Washington, found a foot in a boot.

There has been a long-time theory that these severed feet are a part of some sick serial killer’s foot fetish. People have also blamed the mafia. (Is there a huge mob presence in the Pacific Northwest?)

There is one doctor on TikTok who has a less imaginative theory as to why these feet sneakers keep showing up along the shore.

It’s a total win for the sneaker industry, though (and apparently those who make boots). LOL!

Dr. Karan Raj, who is completely TikTok famous, has the theory that these discoveries have more to do with human anatomy and the fire way that footwear is made these days.

He explains that when a corpse falls to the ocean floor, it immediately becomes feeding fodder for those predators of the deep.

K. My first question is, why are there so many corpses falling into the ocean? Is this a thing? Do I need to cancel that cruise I have planned this fall?

Dr. Raj explains that, “”These scavengers are lazy feeders and prefer to tackle the softer parts of the body than the tough, grisly bits.”

He says that some of the fishies’ favorite bits of the body to feed on are the soft ligaments and tissues around the ankle — but the feet are covered in shoes, so they are a no-go.

So, as these carnivorous fish feed on the ankles of these victims, the feet fall off.

Apparently, when these feet detach from the body, they would usually just stay at the bottom of the sea.

But, because the sneakers and footwear are so buoyant, the severed foot sneakers are floating to the top.

Gas-filled pockets [have] become common in sneaker soles (and they’re visible in some sneakers found in the Salish Sea), but around that time, the foams used in sneaker soles started to be noticeably lighter, with more air mixed in. In other words, they’ve become buoyant.

It appears that this Pacific Northwest area has a unique design, which is allowing these feet-filled sneakers to show up on the shore.

First, it’s an unusually large and complex body of inland water, which acts as a trap. — Once something goes in the water, it might wash ashore in plenty of places—but it’s still within the Salish Sea.

The winds in this area tend to go from east to west, brushing these shoes along the current, and making them hit their land target along the Pacific Northwest shores.

And finally — you see a lot of folks wearing sneakers at the beach in the Pacific Northwest, where many choose to hike among the slippery rocks.

It seems that accidents and suicides are a more plausible answer for these sneakers, and not serial killers, mafia, or even pirates.

Using DNA, the [National Missing Persons DNA Program] linked nine of the feet to seven missing people. (For two, both feet were found; most had been missing for a year or more.)

Regardless of where, what, when, and who these shoes belonged to, remind me to stay the heck out of the Pacific Northwest!