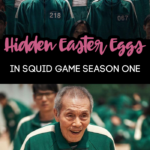 Squid Game, a series on track to become Netflix’s most watched show is currently number one in 90 countries.

If you haven’t binged the nine episode series of Squid Game, spoilers will be revealed below.

Towards the middle of episode nine we found out that the old man (Oh Il-nam), also known as player 001 was the host behind all six games.

It may have come as a shock when Seong Gi-hun’s ganbu (best friend) reaches out to him after the games, ultimately revealing his identity after supposedly dying after the marble game.

The man who was behind the entire killing games was the one who played among them but here’s why it wasn’t so shocking after all.

The series subtly hid clues throughout the episodes before the climax revealing that the old man, wasn’t so innocent after all.

Thanks to TikToker @ruthbellpan who caught the old man cheating from the very first game ‘Red Light, Green Light’, while every player was scanned for movement, the old man was completely missed.

Now before you shake your head no, carefully rewind episode one, you’ll notice everyone around him is scanned except for the old man.

Instead of appearing perplexed by the circumstances he finds himself in, he also appears relaxed throughout the game and smiles while running to the finish line unbothered.

The second Easter egg was his number.

@ruthbellpan also noticed when detective Hwang Jun-ho finds the archives to Squid Game, we’re shown that the book lists every player beginning at the number 002, while 001 (Oh Il-nam’s number) is not listed in the books.

Oh, and remember when Oh Il-nam peed himself while everyone was sleeping, did you miss the empty water bottle to his left.

According to @ruthbellpan, there’s a theory that the old man purposely poured the water on himself as a test to see if his best friend Seong Gi-hun would help him during his time of “need”.

As it turns out, we were all fooled by the old man.