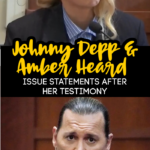 What a freaking mess!

Amber Heard is putting on quite a show… am I right?

Both Johnny Depp and Amber Heard’s teams have issued statements after her recent testimony on Thursday.

Amber testified that Johnny had assaulted her with a bottle, sexually.

After that testimony of the alleged abuse and sexual assault, both had statements issued.

As Mr. Depp’s counsel correctly predicted in their opening statements last month, Ms. Heard did indeed deliver ‘the performance of her life’ in her direct examination.

When I watch her speak, I feel like I am watching an audition and that she’s really trying to nail the part, but overdoing the acting.

While Ms. Heard’s stories have continued to grow new and convenient details, Mr. Depp’s recollections have remained exactly the same throughout the six painful years since her first allegations were made. His truth — the truth — is the same no matter the environment in which it has been presented.

I can not wait to see the cross-examination from Johnny’s team.

The upcoming cross examination from Mr. Depp’s team will be most telling, and will certainly highlight the many fallacies Ms. Heard has now attempted to pass off as fact throughout her convoluted testimony.

The new PR team that Amber hired after firing the other PR team is working hard to attempt to clean up her image because things are just not going well for Amber.

They even emailed us after I wrote about her firing the previous team, sorry y’all… she created my opinions, not the PR team.

As evidenced by the statement just released, Mr. Depp’s defamation claim is falling apart so rapidly that his counsel are turning from prosecutor to persecutor.

Even though I believe Johnny’s story has remained the same, they insist that isn’t the case and continue that theme in this statement.

They boast that Mr. Depp’s story has not changed. If so, since he lost the Domestic Violence Restraining Order and he resoundingly lost the libel case in the UK, perhaps he should consider a new strategy rather than the recycled approach of attacking the victim, and refusing to take responsibility for his own conduct.

The statement below really got me, why would he WANT to look at her? She has ruined his life!

I would also “snicker” hearing the hypocrisy coming from her mouth, and guess what… doodling is a calming distraction for people.

Why is it so hard to accept that men are also victims of domestic abuse?

That same team is so panicked they are fighting tooth and nail to prevent compelling evidence and photos from being introduced. Small wonder Mr. Depp does not have the fortitude or courage to even look at Ms. Heard at all throughout the proceedings — as he could not in the UK trial — and, instead he doodles and snickers.

All that Johnny wants is to clear his name and get his life back.