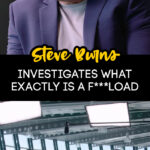 Steve Burns, who we know and love from Blue’s Clues, is answering one of life’s most important questions.

You know we’ve all asked this question at one time or another.

“How Much Exactly Is A Fu*kload?”

He doesn’t solicit the help of the Handy Dandy Notebook for this one, but it’s hilarious none-the-less.

The GENIUSES at Flock Freight put Steve on the case for this documentary-style commercial that has him pondering the tough question.

As all good investigators do, he brings in the experts — of course, Flock Freight, itself — to help get to the bottom of the case.

Regardless of the size of the load, we find the most efficient way to deliver it.

It seems like they would definitely be the ones to determine exactly how much is in a fu*kload, right?!?

That’s brilliant. What is a fu*kload?

A fu*kload is anything more than 40 feet, which usually requires a full truckload.

There you have it, people! The official answer to “How Much Exactly Is A Fu*kload?”

But, Steve doesn’t stop with just inquiring about a fu*kload. Nope.

What is a sh*tload?

A sh*tload is anything between 10 and 40 feet on a trailer.

Y’all the amount of Steve Burns humor at work here is simply brilliant!

You have to just see the Flock Freight fu*kload commercial for yourself! Check it out HERE.