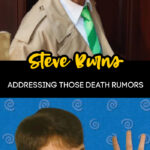 Have you heard all those Steve Burns rumors — the ones that say he died?

Steve left Blue’s Clues — to go to “college” — and then pretty much fell off the face of the earth.

Obviously, he did not.

Steve has been popping up in our social media feeds for the last couple months, so we know he is alive and well.

But, he is finally sitting down and addressing those crazy rumors of his demise.

Steve points out the fact that he did not die. LOL!!

Some have said that he was in a horrendous car accident. *False*

People have been circulating rumors that he died of an overdose. *Fake News*

You may have heard that he died of a terminal illness. *Not Even A Little*

We are totally here for all things Steve Burns, and we are happy to say that he is here to stay.