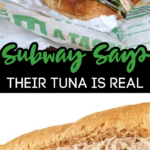 Something smells fishy, but apparently it’s not Subway’s tuna.

The scandal around Subway’s tuna has not stopped the subway shop from telling the public that their tuna is real regardless of what everyone else is saying.

“Our tuna is nothing but 100% fantastic tuna,” said Trevor Haynes, Subway North America President told Yahoo Finance Live . “It’s delicious. You want to learn more about it, [go to] subwaytunafacts.com and you will find plenty of info. But tuna is there, and it’s alive and kicking.”

Trevor Haynes defense comes after a series of claims, lawsuits, and continued scrutiny against Subway’s tuna regarding whether or not the fish their stuffing in sandwiches is real.

A lawsuit that was filed last January by Oakland-area resident Nilima Amin claimed Subway’s tuna consists of only partial tuna or none at all.

This July, a judge ruled that the consumer lawsuit could move forward according to NPR.

Still, Subway lists on their website that their tuna is wild-caught “skipjack tuna.” and is 100% real.

The website also states that the tuna they use is also regulated by the Food and Drug Administration (FDA) with a series of other facts Subway has written on the site which you can check out, here.