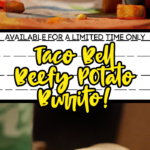 If you were a fan of the Beefy Potato Burrito from Taco Bell, you’ll want to take note! They seem to be bringing back some of the faves that were wiped from the menu.

Earlier this year Taco Bell brought back the Cheesy Fiesta Potatoes and Spicy Soft Taco to the menu. Now you can expect to see the Beefy Potato-rito on the menu soon!

If you’ve never had a Beefy Potato-rito, let me describe it to you. It is a warm flour tortilla that they fill with crispy potato bites. Then they top that with beef, nacho cheese sauce, and chipotle sauce.

If you speak fluent Taco Bell, you know that we’re no stranger to making up classic names. Crunchwrap. Doritos Locos Tacos. Even the Quesarito—a quesadilla perfectly merged with a burrito. But, still, one thing is missing here. There’s no hyphen like in Beefy Potato-rito.

They also let you customize it with add-ons. Some people even turn it vegetarian by skipping the meat and cheese and replacing those with guacamole and tomatoes.

The best part is the price point! If you are out and about and starving, but don’t want to drop some big bucks on fast food… head to Taco Bell! You will be able to score the Beefy Potato Burrito for only $1!

The Beefy Potato Burrito will be back on the Taco Bell menu starting April 15th. However, if you are a Taco Bell Rewards Beta member, you can get it right now!

Here’s the sad part, they say it’s only back for a limited time. So if you love it, make sure they know it’s in demand and maybe it will come back to stay!

1shares
The IRS Says The New Monthly Cash Payments For Parents May Be Delayed
← Previous
You Can Get Your Dog Or Cat A Pineapple Bed and It's The Cutest Thing Ever
Next →
Click here to cancel reply.