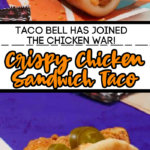 So is there any fast-food business that has not yet joined the chicken wars? I’m thinking just about everyone has jumped in now.

Taco Bell seems to be the latest one to throw their version of a crispy sandwich into the ring. It’s basically a fried chicken sandwich, but the taco edition.

Taco Bell then fries that bad boy up and serves in a taco-shaped puffy bread. The Crispy Chicken Sandwich Taco is then topped with a creamy chipotle sauce.

If you’re feeling a bit extra, you can upgrade that to a spicy version that has jalapeño slices added.

As of right now, these will only be available in Nashville, Tennessee, and Charlotte, North Carolina starting March 11th. A nationwide release is planned for later in the year.

You can get the Crispy Chicken Sandwich Taco for only $2.49. It’s kind of similar to the Crispy Tortilla Chicken that was out for a bit in 2019.

What do you think? Will you give the Taco Bell Crispy Chicken Sandwich Taco a try? I have some kids that will be waiting for the nationwide rollout.

150shares
Rare Yellow Penguins Exist And They Are Basically The Cutest Things Ever
← Previous
You Can Get A Bright Yellow Pineapple Water Bottle From Starbucks That Looks Exactly Like The Fruit
Next →
Click here to cancel reply.