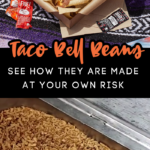 Employees have dropped the bomb on how Taco Bell makes its refried beans, and I’m gagging just a little bit.

Sometimes it’s best to just not know how our food is made. Just eat it and enjoy it — don’t ask any questions.

In fact, my mom used to say, “Don’t ask something you don’t want to know the answer to.”

Best advice she ever gave me!!

That has never been more true than the last couple of years. Employees have been posting behind the scenes videos to TikTok, and I simply can’t look away (as much as my brain tries to tell me NOT to watch them).

So far, we have learned how KFC makes their Mashed Potatoes, how Panera makes their famed Mac & Cheese, how Chick-fil-A makes their renowned Chicken Nuggies — we even learned to keep our eyes forward and mouths shut at our local fast food chain drive-thrus.

Now there is something else that has been spoiled for me. Taco Bell employees have been posting to TikTok showing exactly how to makes the beans that go in just about everything they serve.

I mean, I knew there weren’t people in the back growing beans in a mini garden. Of course they aren’t back there double frying beans to compliment a tasty burrito or nacho. But, I wasn’t exactly prepared for how they got the beans that taste the same from restaurant to restaurant.

Here’s the thing. The beans start out as a bag full of what resembles my cat’s litter box.

It is important to note that this TikTok account we are about to mention have been taken down. I have no idea if their employer put a halt to their account, but I can see how Taco Bell wouldn’t be too happy to have their secret out in the real world.

@Belia_e_hernandez is the original poster who released the spoiler alert of the beans into the universe. While her account is no longer there, that didn’t stop us from getting screenshots. *Evil Laugh*

At the beginning of the video, she pours a bag of what she tells us are dehydrated beans into a container.

She then fills a Gallon jug with hot, hot water straight out of the machine that makes their tea and coffee.

Then, the hot water is added to the dehydrated beans, and the rehydration begins. There is a lot of stirring involved in the process.

Even when you think it’s time to stop stirring, she doesn’t stop. The beans need to get to that pasty consistency that we know and love.

The process of rehydration takes about 45 minutes, so they really have to plan out exactly how many beans they are going to need. It would totally suck to run out of beans at Taco Bell!!

If you are thinking “Ew,” you aren’t alone. Many people took to social media to speak their peace about those rehydrated beans.

I’m just going to go on record as saying, you have been eating them for YEARS. It never mattered before exactly HOW the beans were made. It only mattered that they were on our burritos. Don’t let a few videos deter you from enjoying those pasty beans.

My guess is, beans aren’t the only thing that Taco Bell cuts corners on to save time. I don’t even want to know how they make that taco meat. And, don’t get me thinking about that unnatural, yet oh-so-delicious, melted nacho cheese product.

I worked at Taco Bell in the late 80s while in high school when they cooked everything fresh in house. Including the beans in huge pots. Then a few years later I worked there again as a second job for extra cash. The beans are definitely dehydrated in bags and the meat is pre-cooked in bags. I saw them heat the beef in the bag in the water that's used to keep everything hot under the metal bowls. They then used same water to rehydrate the beans. That was when I just couldn't eat Taco Bell anymore. Not saying they all cook the beans with that after from underneath, but this one just grossed me out.

I worked at Taco Bell in high school (roughly 15 years ago) and this is how our TB made beans (dehydrated from a bag w/hot water mixed in).

No surprise to me. Years ago I saw TB staff mixing the beans with a power mixer. That was when their beans had a yummy creamy texture rather than a sticky pasty texture. They need to add more water to the mixture. As for reconstitution beans. That's not a big deal. Beans store well dry and can be rehydrated. That's how soup is made with any dried bean in it.

@Lydia D Raley, I think you're confused where you worked. TB has made their beans in a large mixer for years. I've seen it done many times. I'm not complaining. Up until the last few years, they were my favorite!

I job coached at Taco Bell. They cooked regular beans ! Somebody lied for attention!