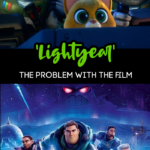 Buzz Lightyear is such an iconic character. We have loved him since he “flew” onto the screen in 1995.

His catchphrases — “To infinity … and beyond!” — his endearing space ranger cluelessness, the way his character interacts with the other toys — especially Woody. You can’t help but love him.

This Lightyear movie is NOT that character.

So, the thing is, in Toy Story, Buzz Lightyear was a toy based on a character that Andy had seen in a movie.

This Lightyear is that movie.

It’s the story about the “real” Buzz Lightyear — the hero that inspired the toy — which kinda has nothing to do with the Pixar Buzz that we all know and love.

I mean, it has EVERYTHING to do with the toy. This movie supposedly spawned the toy. But, we don’t get any glimpse of the Buzz Lightyear that holds that special place in our hearts.

First of all, I LOVE me some Chris Evans — who voices the character of Buzz in the movie — but Tim Allen, he isn’t.

I mean, Tim Allen’s voice IS Buzz Lightyear. So, it’s a little jarring to the senses when Chris Evans’ baritone comes out of Buzz’s mouth.

But then, why wouldn’t the voice be different? This ISN’T the toy — it’s the “real” character of Buzz.

We also go into the movie expecting a certain Pixar-ness to the story.

While the movie is good. It lacks a bit of that Pixar magic that we get from the Toy Story Franchise.

Maybe you just have to forget everything you associate with Buzz Lightyear — our Buzz Lightyear — and watch this movie with the knowledge that this is a separate and different film altogether.

What Is The Premise Of Lightyear The Movie?

Buzz Lightyear has landed on a planet with his crew and commanding officer — who is also his best friend.

After finding that the planet is hostile, the team tries to evacuate, but Buzz ends up damaging the spacecraft.

The next year finds them trapped on this planet while they make the needed repairs to the spacecraft to escape.

Once the team is ready, Buzz Lightyear volunteers to test the hyperspace fuel — which is needed for the repairs of the spacecraft.

But, there is a little problem.

Buzz goes into space for 4 minutes — but because of the way hyperspeed travel works — he is gone for what amounts to 4 years for the rest of the crew.

The testing continues, but each time Buzz does a 4-minute trip to space, 4 minutes pass on the planet.

Eventually, 62 years have passed. During this time, the colony on the planet grows, his best friend gets married to her partner (a hella controversial move by Pixar), and she eventually passes away.

A bunch of stuff happens. Buzz gets introduced to Zurg — who we know from Toy Story as Buzz’s nemesis. He gets a new commanding officer and a robot cat named Sox — I bet we see many cute Sox toys in the stores.

Basically, the story is okay, but it just misses the mark on that Pixar magic.

We go into it expecting a certain Buzz-like quality, and we don’t get that.

Should you see it? Sure. It’s a movie you can add to your Pixar library of films.