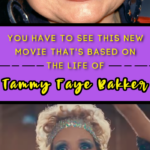 They are making a movie about the life of Tammy Faye Bakker, and I’m so intrigued right now!

One of my FAVORITE characters from the 1980s was definitely Tammy Faye Bakker.

It wasn’t because she played a character on TV or in the MOVIES, but she was a real-life train wreck — her life, her marriage, the aftermath.

People couldn’t help but poke fun at her — she looked a little, shall we say, eccentric, and she was USUALLY seen with a tissue in her hand, all teary-eyed for the camera — but I always felt just a little bad for her.

They were the religious power couple of the 1980s — Jim and Tammy Faye Bakker.

They were among that first wave of televangelists that ruled the airwaves for almost all of the 1980s — I remember my parents watching The PTL Club RELIGIOUSLY. (LOL!! I didn’t even mean to make a pun there!)

The thing is, I think Tammy Faye genuinely believed what she was telling the world — I think she authentically had a heart for people.

She was among the first “religious” personalities to openly support the LGBTQ community, and even supported and visited with AIDS patients at a time when everyone was terrified of “catching” the virus.

She would welcome drug addicts onto The PTL Club, and invite them to tell about their addiction and the perils of drug use — which didn’t sit well with the producers of the show.

It was her husband, Jim, who seemed to be the corrupt powerhouse, seeking more and more money so he could become richer and richer.

And, it was Jim who blindsided Tammy Faye when it was announced that he had an affair with — and paid off — the infamous Jessica Hahn — who claimed Jim collaborated with John Wesley Fletcher to get her drunk and basically rape her.

Tammy Faye filed for divorce against Jim while he was in prison for fraud in 1997.

For years I have been pretending that everything is all right, when in fact I hurt all the time… I cannot pretend anymore.

I enjoyed watching her on The Surreal Life — back in 2004 — and it was at THIS point when I started feeling sorry for her, I felt like we got to know the REAL side of Tammy Faye.

She, sadly, passed away in 2007, after a harrowing 11-year battle with cancer.

So, you can see why I’m so excited about this film, Eyes of Tammy Faye!

When I say that Jessica “transforms,” I mean you won’t even recognize her!

Social media is going CRAZY over Jessica’s metamorphosis into Tammy Faye — they just can’t get enough of her!

The Eyes of Tammy Faye is set to hit theaters on September 17, which is about the unofficial start of awards season, so I’m BETTING Jessica will be nominated for SEVERAL!

By the way, this movie is going to be based on the documentary of the same name that came out in 2000 — which you can stream on Amazon right now.

You can catch the trailer for the new The Eyes of Tammy Faye right HERE.