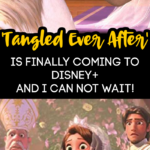 Disney+ just announced that its releasing ‘Tangled Ever After’ which is an animated short that is a continuation of ‘Tangled’.

‘Tangled’, which came out in 2010, is one of our favorite Disney movies and I can not wait to watch the short that was actually created back in 2012.

So ‘Tangled Ever After’ has actually been available on Disney+ in other countries since Disney+ launched, however, here in the US (and Canada), it was only available on Netflix.

‘Tangled Ever After’ takes place 2 years after ‘Tangled’ and shows Rapunzel and Flynn Rider at the altar as they get married so they can live happily ever after.

As with all Disney movies, a situation arises…

This situation features Pascal and Maximus and I can’t wait to see what trouble these two get into.

The Kingdom gathers for Rapunzel and Flynn’s royal wedding – but Maximus and Pascal run into a bit of trouble with the wedding rings. The cast for Tangled Ever After (2012) includes Mandy Moore (Rapunzel), Zachary Levi (Flynn Rider), Nathan Greno (Maximus), and Frank Welker (Pascal).

The animated short ‘Tangled Ever After’ will be premiere on Disney+ Day.

What is Disney+ Day?

Disney+ Day is a day full of celebrations that focus on Disney’s animation and entertainment projects.

The inaugural Disney+ Day will be a grand-scale celebration of our subscribers across the entire company…This day of appreciation brings to life our mission to entertain, inform, and inspire fans and families around the globe through the power of unparalleled storytelling, and will become an annual tentpole event to be amplified across our global businesses.

Disney+ Day is a definitely a day for Disney fans because many premieres are planned for the Disney+ streaming platform.

If you haven’t signed up for Disney+ yet, you can do so here!