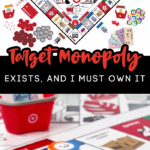 There is a NEW Monopoly game about to hit the shelves, and it happens to be a Target version.

My family has a bit of a Monopoly obsession. We own far too many different versions of the game. Ha!

But, this NEW Monopoly Target game is about to be MY Monopoly game of choice when it comes to breaking out our favorite Friday Family Night activity.

You know how in regular Monopoly, you are trying to buy up real estate on the board?

In this Target version of Monopoly, you are shopping for different items and trying to get the best deals in town. (Something in which I am already well versed!)

In the Monopoly: Target Edition game, players browse for Items instead of buying properties. It’s about how much one can save in this Target-themed family board game

You get to race around the Target store, putting items in your red shopping cart, and trying to get the coveted Target RedCard, which will save you even MORE money in the end!

Of course, they have paid special attention to every detail in this version of Target Monopoly. Even the playing pieces represent your FAVORITE store!!

Players get to explore their happy place with a Target-themed Monopoly token. Choose Target’s mascot Bullseye Dog, a shopping bag, a coffee cup, or a shopping cart

Now, you can’t just go to any store to pick up this version of the game. OBVIOUSLY, this is going to be a Target exclusive.

It doesn’t hit shelves until August 1st, but that is JUST in time to pick it up for your favorite Target enthusiast, and put it back for the holidays!!

I am suspecting that this Target Monopoly is going to sell out VERY quickly. If you want to make absolutely sure you bet your hands on one — which you will want to! — you can preorder the game.

It is going to be less than 25 bucks, and you can go reserve your copy of Monopoly: Target Edition right on the Target website.

Go, Go, Go!! This is going to be the BEST version of Monopoly yet. I can’t wait!!