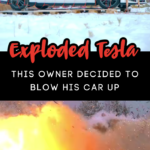 This Tesla owner couldn’t get the battery in his car to work, so he decided to just blow it up — the whole car!!

Teslas can be great cars. They come with TONS of features — they are basically an iPad on wheels — and they are pretty reasonably priced.

But they also come with their fair share of problems over time. One major problem, as Tuomas Katainen found out, is the cost of upkeep.

He had been driving his Tesla 2013 S Model with no problems — until there was a problem.

See “Tesla warranties will cover the cost of battery replacement if it drops below 70 percent capacity within the first 150,000 miles or within eight years of purchase.” But, go outside of the warranty, and you have trouble.

Tuomas had been having problems getting the battery to charge, and he needed to get it replaced.

But, he wasn’t aware that it would cost a whopping $22K to get his battery replaced — about half the price of the original price of the car!!

When I bought that Tesla, the first 1500km were nice, it was an excellent car so far,” Katainen explained in the video. “Then error codes hit in, so I ordered a tow truck to take my car in for a service.

He wasn’t about to pay the price to get it fixed, so Tuomos, who lives in Jyväskylä, Finland, did what any disgruntled Tesla owner would do — he enlisted the help of YouTubers Pommijätkät — AKA The Bomb Dudes — to help him get rid of his little problem.

But, they weren’t just going to junk the car, oh no, The Bomb Dudes had grande plans for Tuomas’ undrivable car.

They headed out to an abandoned quarry and outfitted the car with 66 pounds of dynamite.

The doomed car even had a driver inside for its final journey: an effigy of Tesla CEO Elon Musk, whom they dubbed “Elon Mask”.

The dudes got behind their protective bunker, and sent the Tesla to scrap metal heaven with one flick of a switch.

It was there, all beautiful in front of a snowy backdrop, and then the next second, it no longer existed.

That’s one way to deal with the problem, AMIRITE?!?

You can see the entire YouTube video of the detonation HERE.