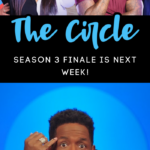 Did you catch up with The Circle today?! If not, get your butt to your TV and watch! There will be spoilers below!

After lots of breaths being held after last week’s cliffhanger, we finally got to see who Nick and Daniel chose to eliminate!

Daniel decided to give ‘Jackson’ the boot, while Nick chose Ruksana. And I have to say, that’s exactly who I was hoping they’d choose.

I think Rachel (Jackson), was the worst catfish and although Ruksana was a sweetheart, there wasn’t much excitement involved with her. (Sorry girl)

But THEN, SOMEHOW, Nick convinces James to boot Daniel. And that is what I believe was the biggest mistake the non-band team could have made. He did a great job convincing, but James just threw the game for him and Kai.

And THEN, Nick does it AGAIN by convincing James to boot Jacki. Literally the ONLY WAY James and Kai had a chance. What on earth was he thinking?!?!?

But that just means that my band team is in the lead and that makes me super happy. My guess is that either Nick or Kai are going to win, but honestly, my vote is for ‘Ashley’.

‘Ashley’, aka Matthew has been around since day one, has catfished as a woman this entire time without getting caught, has been MASSIVELY strategic, and has made this show for me.

My second pick (who was my first pick last week) definitely is ‘Isabella’, aka Sophia. I feel like I could be BFFs with these two immediately and have loved them through the entire show.

I have had a love/hate relationship with both Nick and Kai, but I think Nick has the best chance of winning. And I’m just still shaking my head so hard at how much James messed up the game…to my benefit!