Did you ever wish you could live in the world of Harry Potter? I know I have. Even though I’m a 34-year-old woman with a kid, I’ve always been drawn to the world of Harry Potter. If you’re like me, I’m here to say that reading the books, watching the movies, or going to Universal Studios aren’t the only way for us to enmesh ourselves into the wizard’s world. All we have to do is look around, and we’ll find that there’s at least EIGHT TYPES OF LESSER-KNOWN HARRY POTTER CHARACTERS WE WORK WITH. 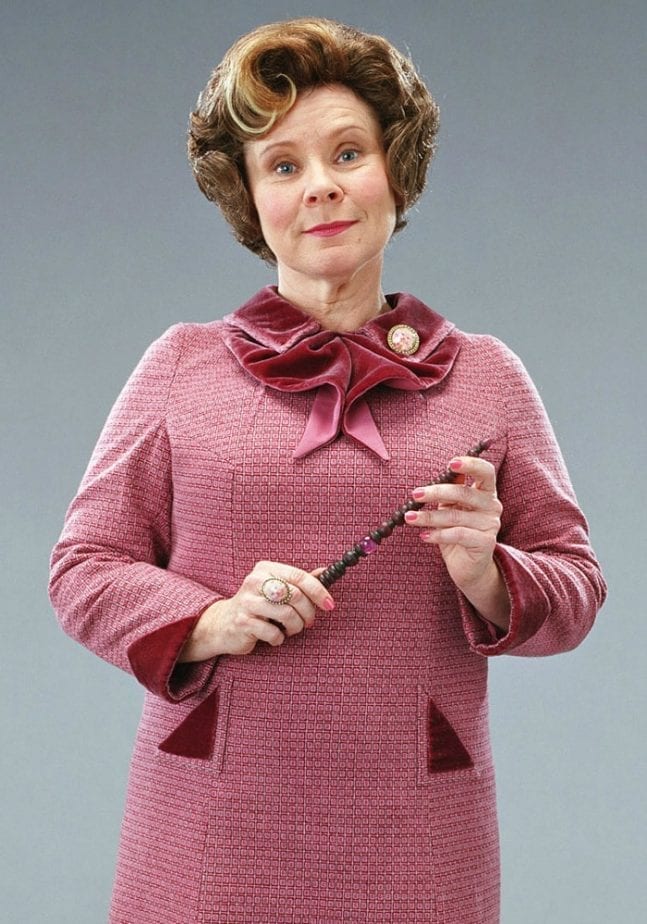 “How are you doing?”

“Ohhhhh-kayyyyyy.” Myrtle slouches over to her cubicle, scowling.

“Well, why don’t you ask Carmen if she’ll do the R-16 forms, and you can do the inventory forms?”

“I’m really busy and no one’s helping me,” she complains.

Carmen is rolling her eyes and holding up a stack of inventory forms. “I AM TOO!” she mouths.

The rest of the day, NAY, the rest of your ENTIRE career working with this person goes like this. You can NEVER make her happy. Eventually, you just learn to ignore her. But you can feel her mood everywhere. It’s so thick it fogs up your glasses and makes the wallpaper peel. It sucks all of the happiness out of the air until everyone in the office is stressed and depressed because, in your co-worker’s mind, everything is terrible, and everyone needs to know it. If you were to hand her a thousand dollars, she’d say, “Why is it all in hundreds? No one breaks hundred dollar bills anymore. Now I have to go to the bank. And not my bank, the one all the way across town, because my bank closes before I get off work. It’s almost not even worth it.”

Syrupy-sweet, this glimmering ray of sunshine is your best friend — until she became everyone else’s best friend, too. THAT’S when the claws came out. Whatever you say to her will end up biting you in the butt later on, and it will have been misconstrued through possibly FIVE games of Telephone before your manager hears about it, and what you said — “I don’t like Bob,” has turned into something awful — “I bet the manager and Bob are sleeping together while murdering adorable kittens.”

Even though, after a while, every person has gone through this with her and knows she’s lied about them, there’s something about her sweetness that makes them believe the lies she’s told about you. This woman plays people like a game of chess, and she’s not in it for the popularity, she simply enjoys being a terrible person. The worst part is that this is the first person to get promoted at work, so now not only do you have to deal with her scheming, you have to deal with her rampant incompetence, too.

This dude. Oh, man, this dude. This is the dude that runs around the office self-importantly, shouting at everyone to improve their performance, making lots of “important” phone calls, and just being a butt in general to everyone. He wears Christmas sweaters at Christmas time and forces everyone to sing carols at the office party, but sighs and announces that he won’t be able to give bonuses this year because “Profit just hasn’t been what I expected,” which must mean that the profit couldn’t cover your bonus and his new Porche.

When it’s someone’s birthday and a cake is brought in for them, does Vernon Dursley wait for everyone to sing “Happy Birthday”? No. He slices a fat slice of cake off, licks the knife, puts it back down on the plate, and gives a hard slap to the birthday boy’s back while shouting over his shoulder as he walks away, “You don’t mind, do you? I’ve got lots of important calls to make. Happy birthday, by the way! Is this chocolate?”

THIS DUDE IS A FRIGGIN’ RAT AND WILL ALWAYS TELL ON YOU WHEN HE CATCHES YOU ON FACEBOOK. His favorite place in the office is just out of eyesight from everyone, where he can gather intelligence and feed it back to the bigwigs so they’ll throw him a bone. Deep down inside, you believe that Peter and Dolores will one day get married in a swamp and have loads of frog-rat hybrid children that are basically Dudley Dursleys.

This guy has a smile for everyone, especially the ladies. He’ll float through the office in his thousand-dollar three piece suit, flashing those big white chompers at everyone as he strolls over to the boss’s office. He casts a wink over at the new girl in accounting, who blushes, and you think, “Oh, so it’s her this week.” You were once like her, too. He was so interested in you, and it was exciting! Until, that is, the project you were working on somehow got deleted from your hard drive and this guy magically had his own project exactly like yours on his own computer. When you bring it up to Umbridge, she looks down her nose at you and says, “Plagiarism is a serious accusation,” and glances at Lockhart, cheeks flushing. You wonder how this guy gets around like he does, but you don’t really want to know. You just want to get this bitch to stop looking down on you. So you let it go. He’ll get his, eventually, and it will hopefully be a very painful strain of herpes.

This guy is the dude who’s been in the office forever, who everyone thinks is kinda weird and a bit off. He wears short-sleeve button-ups with a bow tie, blue corduroy pants, and those retro Nike sneakers with the velcro. He walks around eating weird food like uncooked Ramen or an olive loaf sandwich with american cheese and enough onions to make everyone choke. When having polite conversation with him, he’ll pop off with a super random statement or question, like, “Do you think that time moves faster for bugs? Like that ant there, they say sugar ants only live two to three human years. What if that ant is basically travelling across the barren Sahara desert right now, and it’s taking it like ten ant years?”

……But when you need a hand, this dude is the most genuine and intelligent person in the building, because his joy in life is figuring out how stuff works. Can’t figure out the fax machine? Ask Arthur. Can’t get your printer to print? Ask Arthur. PC LOAD LETTER? What the eff does that mean? Ask Arthur, he’ll know.

This co-worker is flirtatious, fun, and easy to get along with. All the men want her, and upper management used to love her, but once Umbridge was put in charge, Tonks became one of the most necessary but hated employees in the office. She’s smarter than the new boss, quicker than the new boss, she’s not a kiss-butt, and she’s not a corporate puppet. Respect is earned with this girl, it doesn’t matter how large the nameplate is on your door. You’ll catch her in the break room with a cup of coffee, talking smack about management, and when said management walks in, this girl just leans back and maintains eye contact with the boss.

The boss goes to speak, “Did you finish th—”

“It’s on your desk,” Tonks interrupts.

Your boss’s face goes red, and she glowers at Tonks, who, still not breaking eye contact, takes a sip of her coffee while she raises her left eyebrow just enough so everyone knows she’s challenging the boss. Even the boss knows it.

But the boss needs this girl. So she backs out of the room, and you laugh uproariously, wishing in your heart of hearts that you could be that friggin awesome.

FINALLY, THERE’S YOU… THE NEVILLE LONGBOTTOM

You try your hardest at your job, but you often find yourself forgetting important tasks, which makes you feel stupid. It doesn’t help that making you feel stupid is the #1 favorite thing of all the managers in this joint. Really, what you want, is to get out of this place and go home, where you can pet your cat and work on your real passion, which is crocheting coasters and tea cozies to sell on Etsy.

It’s not that you’re not smart, it’s just that you don’t care enough about your job to make sure you get everything perfect the first time. In general, everyone at the office thinks you just can’t handle the pressure of the job, but you’ve never dipped quite enough below “meets expectations” to get fired, so you’re happy to stay right where you are. Some people don’t like you, but the people you like like you back, which is enough for you.

After all, your job is just the thing that gets you the money you need to do what you want with your time away from work, which is talk sh*t about Umbridge and discuss existential things with Tonks and Arthur over a few beers at happy hour.

Hey, I love Harry Potter Crafts so much that I wrote a book about them! My book, THE UNOFFICIAL GUIDE TO CRAFTING THE WORLD OF HARRY POTTER IS AWESOME AND YOU SHOULD TOTALLY BUY IT. 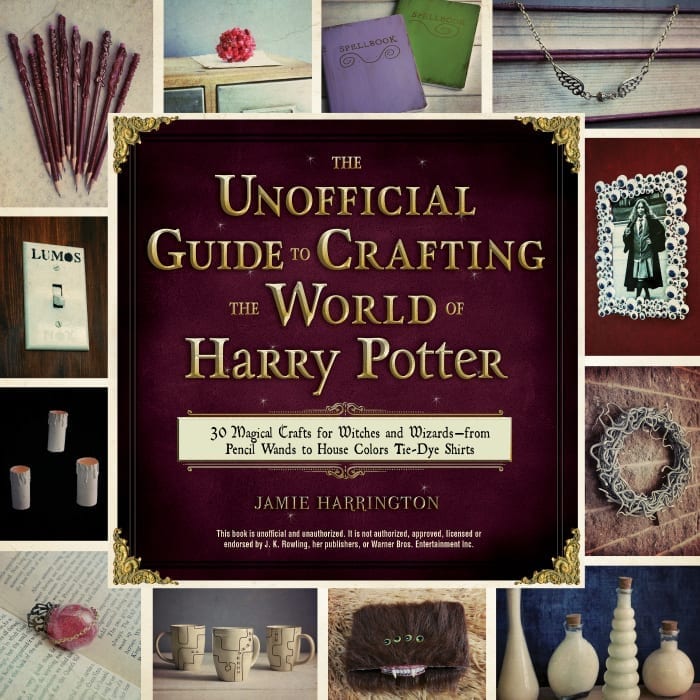 This book is full of charming Harry Potter crafts even Muggles can make!

And don’t worry the crafts in my book are totally different than the list below, so you will have TONS of HP craft-tastic goodies!

Ha, ha! Very funny descriptions. These are so true and I have worked with several of them over the years. As I read this, images of the individuals who fit the roles flashed through my mind. But I have also worked with a Hagrid: kind, loving, loyal and not altogether smart; and even a female Harry Potter. She was the smartest person in the building, always a step ahead of all of us, and a real sweetheart!

Thanks for the read.