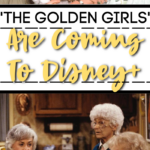 It is clear that older sitcoms are making major comebacks after their seasons are finished for example, ‘Friends’, ‘The Office’ and ‘The Big Bang Theory’.

Disney + has decided to get in on the action of priceless comedic shows because as you can guess, Disney + is launching a very popular sitcom onto their streaming site.

The four golden girls would be so proud and I can bet you Betty White is too because the popular sitcom ‘The Golden Girls’ is officially coming to Disney+!

If there was ever a time to scream out loud, it would be now!

Every episode of ‘The Golden Girls’ will be available to Disney+ subscribers by the tips of their fingers, with the exception of pushing a few buttons on the remote control of course.

When the warmer weather rolls around and coming this summer, Betty White, Rue McClanahan, Estelle Getty, and Bea Arthur will be streaming on Disney+.