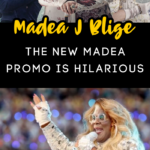 Tyler Perry just took to social media to promote his new film, “A Madea Homecoming,” and OMG — it is hilarious.

Mr. Perry just slays me. He has a way of being hysterically funny, while still hitting you with truth and cutting to the core of what’s real, doesn’t he?!?

Of course, everyone’s FAVORITE character that he plays is Madea. “She” just posted on social media to tell the world about “her” new movie, and talk Mary J. Blige’s Super Bowl performance.

Well, she didn’t so much talk about Mary J.’s performance as she did copy it. LOL!!

Let me rephrase. She didn’t say she copied her — she said she had that costume first.

Blige, who wore a white bodysuit donned with crystals, performed at the event this past weekend alongside rappers Dr. Dre, Eminem, [Snoop Dogg] Kendrick Lamar and 50 Cent.

*Now, I’m not dumb. I know Madea wasn’t really there, and I know she didn’t really wear the outfit. But, it’s hilarious, none-the-less.

I rocked the Super Bowl! Thank you to all my 10’s of fans. I was performing in the parking lot cause I think they was jealous. I had this out fit first and they made Mary’s with the little fabric they had left. She think she the only queen of hip hop soul, but I showed them. God made a way. I rocked it! I mean. I rocked the car I was standing on but you get the picture. These pictures are from me performing my song about someone I miss. It’s called No More Obama.

In case you’re wondering, Madea’s fictional song choice is a shot at the Mary J. Blige song from 2001, “No More Drama.”

And, y’all. This is only the FIRST promo for Madea’s new movie I saw. If you look on Tyler Perry’s social media pages, you will see several more promos that have me crying.

Can anyone say, Bridgerton? LOL!!

The Crown has now become “The Frown.”

Move over, Adelle. Ma-Delle is coming for you!!

Make sure and watch A Madea Homecoming, February 25th, only on Netflix.