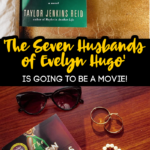 I am an avid reader… I read every single day, normally at night until I fall asleep with a book in my hands.

I have a list of books to be read and one of those is called ‘The Seven Husbands of Evelyn Hugo’ by Taylor Jenkins Reid.

Exceptionally a brilliant read! I hope they do a fabulous film out of this book!!

I guess I better get to reading it because I just found out that Netflix will be turning this novel into a feature film and I have to read the book before I see the movie.

This is seriously THE BEST book. I didn’t want it to end! I’m so excited for this but I really hope the movie does the book justice.

From what I’ve read, the book is about a fictional Hollywood movie icon named Evelyn Hugo who is 79 years old.

She decides she’s ready to tell the truth about her life to a magazine reporter named Monique in one final interview.

Monique isn’t in the best space in life at the time she is chosen and she wonders why she was chosen, accepts it, and chooses to use this to give a boost to her career as a journalist.

From Amazon: Summoned to Evelyn’s luxurious apartment, Monique listens in fascination as the actress tells her story. From making her way to Los Angeles in the 1950s to her decision to leave show business in the ‘80s, and, of course, the seven husbands along the way, Evelyn unspools a tale of ruthless ambition, unexpected friendship, and a great forbidden love. Monique begins to feel a very real connection to the legendary star, but as Evelyn’s story near its conclusion, it becomes clear that her life intersects with Monique’s own in tragic and irreversible ways.

Yay!! I have genuinely been hoping this would be made into a movie. I really hope the movie can properly convey the importance of the costumes as much as the book did!

Most reviews I have read said the story is amazing and that they can not wait to see it as a movie.

Have you read ‘The Seven Husbands of Evelyn Hugo’? If not, you can buy it right now on Amazon!