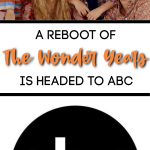 The Wonder Years is getting a fresh reboot, but this time it will be a NEW take on the turbulent 1960’s, with a different family at the helm.

It seems like almost every new show that has come out lately is some sort of reboot of a classic show — and by classic, I mean from like the 1980s or 1990s.

Now, I’m not complaining. I think it’s pretty great!! I love looking forward to an Animaniacs , Punky Brewster, Saved By The Bell, Little House On The Prairie, or even the Tiny Toons reboot — R.I.P. Lizzie McGuire.

And, now we can add another classic show to the list of must-watch revived television shows — The Wonder Years.

ABC has officially ordered a pilot for a reboot of the classic show, which originally aired from 1988-1993.

Now, don’t be expecting to revisit the budding relationship between Kevin Arnold and Winnie Cooper.

(This Wonder Years Reboot) will follow a Black, middle-class family in Montgomery, Alabama, as it makes sure these are the Wonder Years for them, too.

Kevin Arnold will still be around — behind the scenes. Fred Savage, who originally played Kevin, will be directing and co-executive producing with Lee Daniels, who co-created Empire.

I can’t wait to see what they do with this new, refreshed version of the show.

No word yet, on WHEN we might get to see the rebooted Wonder Years, but we will keep you updated as we find out more.