I’ll never forget our first Christmas together…because it was an emotional disaster.

We’d just settled down after years of dating, bought a house and it just so happened that we were going to have the children. Due to other circumstances the kids had never gotten the chance to have a truly festive holiday with their father and I was determined to do everything in my power to make it magical… 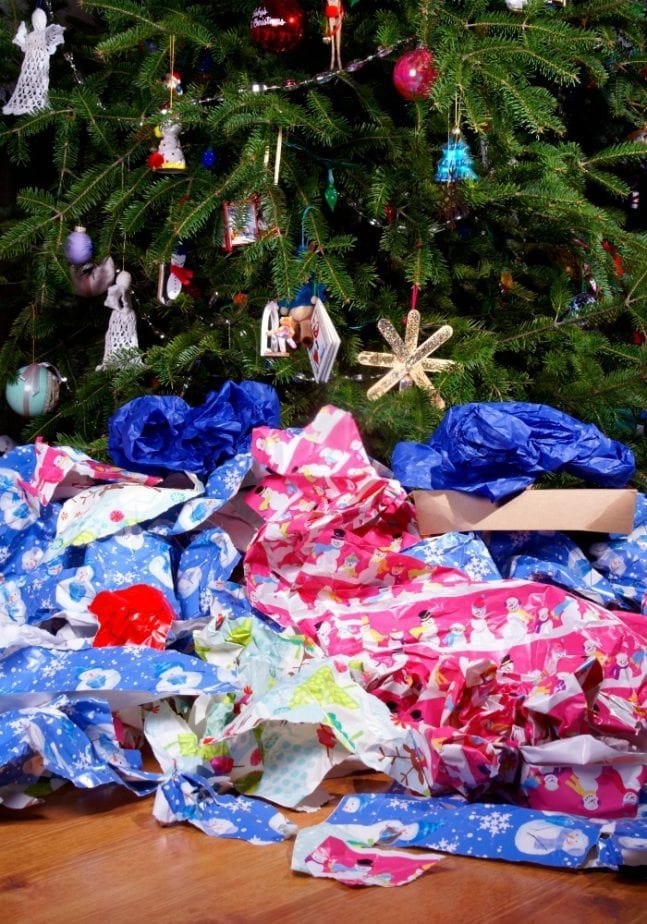 The Year Everyone Got A Present…Except Me…

We went to look at half a dozen different Christmas light displays, some of them lasting hours.

We did movie marathons.

We made so many gingerbread houses I have an automatic knee-jerk reaction when it comes to smelling it. I want to cry, hurl and crawl under a table.

I’ll never forget the first week of December coming in from some sort of epic gingerbread planning trip to find my husband in the foyer prowling around like the Grinch cackling with glee over his dastardly plans. Okay, maybe not the right image, but looking back that’s what it feels like.

He proceeded to tell me that he had the most epic of all presents planned for me. That I was going to be swimming in presents. I was going to have so many, I’d build the cats a castle from their boxes.

This was about the most panic inducing statement ever made in my presence.

One of the ways I show affection to those I truly love is through thoughtful gifts. I’d rather come up with something a person will really want or enjoy rather than give them a dozen things to open, which they may or may not ever use. In one moment he dashed all of my holiday gift giving plans to pieces.

If he was going to get me a mountain of presents, well…I had to give him an ocean so he could Scrooge McDuck his way through them!

I’m exhausted. I’ve been up for hours. The kids are on the most epic of all sugar highs and all I want to do is go back to sleep, yet–it’s time.

You know what time it is.

Now, this took a while because first, everyone was supposed to get all of their presents before opening, but you know someone always cheats. Considering that I’d gone overboard on present giving, it was my own fault.

The kids handed out the bags and boxes I’d spent hours color coordinating, the tree nearly got knocked over, I don’t want to talk about The Flat-screen TV Incident, but eventually we’re down to just a few things under the tree and…

Okay, let me pause here. I’m not all that materialistic but for weeks I’d been hearing about how crazy awesome Christmas morning presents were going to be, so I feel a lot justified in being sort of…what the heck?

The last two presents were for me.

Actually, scratch that, one was miss-wrapped so really, one of those was for me, the other had to be dug out of the kid’s laundry bin because it wound up on them a few weeks before.

Let me full stop here and fill in a few holes. First, my husband has severe ADHD. Like, he can walk five feet chanting, “I need to do the dishes,” and right before he gets to the sink someone will say, “Hey, you want a cookie?” And he forgets about the dishes. You cannot interrupt his one-track-mind or else things do not happen. It’s something he has no control over and does his best to manage, still, he’s human and I love him despite that. Also, it’s really handy for when I forget something, I can just say he was going to do it and he has no memory to say otherwise. KIDDING!

At this point my husband, bless his heart, was very confused. He starts looking around for the presents he knows were there.

Except everything he thought he was going to give me…he already gave me for my birthday…two weeks before Christmas.

To make this disaster of a day even better? We went to three family functions and at every one we were given a couple’s present that was really for my husband. By the end of the day it was a hysterically bad comedy routine of, What else can go wrong?

No, presents and getting stuff are not the point of the holiday. They never should be. If your happiness is wrapped up in what you get from others you’re going to always be disappointed. In my situation I had the expectation for one thing built up and up and up…and nothing happened.

I didn’t make a big deal about it, I made sure we had a fantastic first holiday together, and when it was just my husband and I alone, after the kids had gone back to their mother, we had a very serious heart to heart about the whole holiday, hurt feelings and what it should have really been all about. I’m happy to say that he has yet to forget another important date without a present, so I’m pretty sure his horror ran deep enough he’ll never forget that holiday.