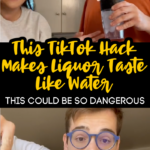 I’m used to be of the firm belief that drinking wasn’t for the weak and getting down the strong liquors was a right of passage.

However, these days I rarely drink, that was part of my younger years when I thought I was a bit tougher.

I used to drink some pretty wicked drinks, things I could never stomach now.

The trend on TikTok started after a creator that goes by the user name @chixy38 made a TikTok claiming that by following her instructions you won’t taste the alcohol taste of Vodka and Tequila.

What You’ll Need To Try It:

makes it a little too easy to drink.

In her TikTok video, she filled a glass half full with ice, then halfway with clear liquor.

Then she added a splash of mineral water, one tiny pinch of baking soda, and a tiny bit of salt (add more if you still taste the alcohol)… then mix and drink!

Many people have tried it and say it does work, others say it works because what she is adding is nearly identical to club soda, which is often used as a mixer anyhow.

You can watch her TikTok here, and while I haven’t tried it myself yet, I would love to know if you did.