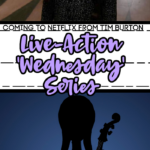 This is definitely something I can get excited about! I love the Addams family! I grew up watching the television show and I loved the movies as well.

Netflix has officially announced that Tim Burton is creating a live-action series! It’s completely based on Wednesday Addams, my favorite character from the show!

So far 8 episodes have been ordered by Netflix and it is called “Wednesday”.

They describe the new series as a “sleuthing, supernaturally infused mystery charting Wednesday Addams’ years as a student at Nevermore Academy”.

Wednesday’s attempts to master her emerging psychic ability, thwart a monstrous killing spree that has terrorized the local town, and solve the supernatural mystery that embroiled her parents 25 years ago — all while navigating her new and very tangled relationships.

The writers for the new live-action ‘Wednesday’ series will be Alfred Gough and Miles Millar.

So far there has not been any announcement on who will play Wednesday Addams. In fact, there hasn’t been any casting information released.

Netflix has not announced a release date yet. We will be sure to update you with that information as soon as well know.

I can not wait to see a trailer for this and I hope Christina Ricci has a cameo!