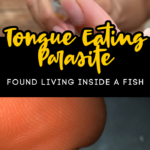 They say everything in Texas is bigger. Apparently things are also more bizarre, because take a look at what was found at Galveston Island State Park.

This sounds totally made up, like it is part of some Halloween story. But, it’s 100% true, and the weirdest thing you will hear today.

This fish was pulled from the waters around Galveston, and researches immediately noticed something a bit different about this Atlantic Croaker.

It’s tongue, or lack of tongue as the case may be, had been replaced by a parasite resembling a pill bug.

This parasite actually becomes the fish’s tongue, in place of its real tongue, and this sounds just like a horror story.

The parasite then feeds on the fish’s mucus.

*Gag* I think I just threw up a little bit.

This parasite is known as the Snapper-Choking Isopod, and everything about the nature of this thing is terrifying.

I’m now going to have dreams of my tongue being eaten by a squirmy thick armor covered bug.

Now, as gross as this ispod is, it doesn’t actually kill the fish. It just gets rid of its tongue, and sets up camp in the marine fishie’s mouth. But it doesn’t kill the fish — it just feeds on its secretions. *Shudder*

I am also told that this parasite does not affect humans in any way.

I prefer not to test this theory.

All those Snapper-Choking Isopods can just stay the heck in Galveston, and I’ll stay way over here minding my own business and keeping my tongue intact.