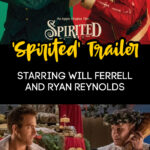 They just released a new teaser trailer for Spirited, the Apple Original Christmas Movie starring Ryan Reynolds and Will Ferrell, and now I want to watch it!!

Ryan Reynolds is just about my favorite thing on earth, and Will Ferrell makes me LOL in the best possible way.

But, when I first saw the still pictures of Spirited I thought, “Yikes. What have they done? I think I’ll pass.”

I mean, a Christmas musical with over-the-top tap dancing numbers and ensemble choreography.

But, y’all. I just watched the teaser trailer for Spirited, and it looks so good!

Spirited is a new take on the classic Charles Dickens story of A Christmas Carol — which we’ve seen done a million times before.

This time, however, there’s the humor that only Will Ferrell and Ryan Reynolds can bring to the screen.

Picture it: Ryan Reynolds as a Scrooge-like-character, with Will Ferrell playing one of Dickens’ ghosts.

The potential for uncontrollable belly laughs is definitely at 100%.

I can even look past all the singing and tap dancing. *Winky Emoji*

And, this might be my favorite part. Spirited will be released in theaters on November 11, and will be available to watch from your couch on Apple TV+ November 18!

You get to choose your viewing experience!

Check out the new trailer for Spirited below, and I’ll see you in the theater on November 11th.