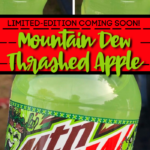 It’s not very often that I partake in drinking a Mountain Dew, it’s SO sweet and has become one of those once in awhile type things for me.

But, when something new is coming out, I have this need to try it because I’m curious and also just because I deserve something tasty too.

The new flavor of Mountain Dew is called Thrashed Apple and I really can’t wait to give it a try.

The description on the bottle reads:

Now, apples make me think fall, so I was assuming that this would be released in the fall.

However, according to @LanceShelto on Twitter, who was given a bottle from “a VP of Pepsi,” posted to Twitter that it would be “in select limited stores in 3 weeks”.

But, then there is a Reddit user that said that the new drink is releasing the week of September 9th, 2021…

Mountain Dew Thrashed Apple should be available in 20-ounce bottles and 12-ounce cans.

If you see it in stores soon, let us know so we can track it down too!

2 shares
Ariana Grande Secretly Got Married Over The Weekend To Dalton Gomez
← Previous
Amazon Is Selling A Mermaid Cat Pool Float and It Is Purrfect
Next →
Click here to cancel reply.