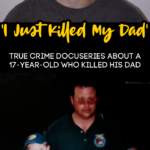 Y’all already know I’m obsessed when it comes to true crime movies and documentaries, there is nothing more terrifying than real life.

Anthony Templet was just 17 years old when he killed his dad, Burn Templet, with 3 shots back in June of 2019.

I just, uh, killed my dad. What do I need to tell you?

Anthony told a 911 operator after he shot his dad.

Burt was actually still alive at that time, but was placed on life support and then died a few days later when they removed him from life support.

The 3 part docuseries tells the story that led Anthony to the point of shooting his dad and it’s a story that you’ll want to hear.

I want people to know that I’m not crazy, and I’m not a murderer, and I’m innocent.

I don’t want to put any spoilers in this post, I hate that, so I’ll just give you some of the information and let you learn the rest while watching the docuseries.

Anthony says that the shooting was in self-defense and he had a very strange upbringing, he was raised by his father and he wasn’t offered any sort of education.

Burt also refused to let Anthony have friends, go to the dentist, or the doctor, and even monitored him with security cameras!

Anthony also speaks of the emotional and physical abuse that he suffered.

I’ve been punched and thrown and kicked, and it wouldn’t stop for hours.

Teresa Thompson is Anthony’s biological mother, she was also abused by Burt and he even went to jail for assaulting her.

Somehow though Burt was granted temporary sole custody of Anthony and his mother was unable to continue to fight for custody due to not having the resources.

This story is one that you have to watch, ‘I Just Killed My Dad’ is currently streaming on Netflix.