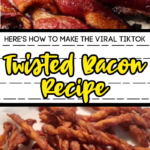 I, like most people, love bacon. I hate cooking it though because without fail, I am always getting popped, I know I could cook it in the oven and now that I’ve seen this, I have to try it!

They’re calling it Twisted Bacon and it has pretty much taken over the internet the past few days. People are saying that this is the best way ever to cook bacon.

Apparently, twisting the bacon before baking creates a mix of soft and crispy that people are loving.

The trend quickly went viral on TikTok, so of course, we had to share it with you! Plus, it’s easy to make and that is a bonus!

Some people are using this method to make bacon for breakfast, however, I am thinking this is a great way to create some snack bacon to have on hand! I mean just think about it, make grab and go bags, yum!

Making the twisted bacon only requires one ingredient, which of course is thick sliced bacon! However, there are plenty of things you can add on!

If you want a sweet bacon you can sprinkle the twisted bacon with brown sugar before baking. Or one of my favorite combo’s is bacon and maple, so I would drizzle the bacon with maple syrup!

For sweet and spicy twisted bacon you can make a mixture of brown sugar and cayenne pepper. Sprinkle it over your twisted bacon before baking.

Some people are even dipping the cooled twisted bacon in melted chocolate and then sprinkling it with sea salt. My mouth is literally watering right now!

How To Make Twisted Bacon

All that you need is your thick-sliced bacon, a baking sheet lined with some parchment paper.

Preheat your oven to 350 degrees. While it’s preheating, twist each strip of bacon tightly and place it on the baking sheet.

Once it is completely cooked, just take the twisted bacon and place it on a plate covered with paper towels to soak up the extra grease.

I plan on making several trays at once and storing them in the refrigerator in ready-to-go snack portions! This is seriously one of the best ideas ever, watch it on TikTok here.