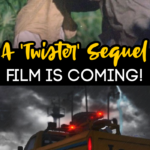 Who doesn’t love a sequel with a movie we expected a sequel for years ago, for example Hocus Pocus.

And now we finally get out closure to the 1996 film that brought us one of the best disaster films of all time.

Can you guess the movie; here’s a hint, flying cow.

That’s right, the long-awaited sequel to the classic 96′ Twister film has been officially confirmed according to a representative for Universal.

Dubbed the name Twisters and with an “s” this time around, movie goers will be chasing the storm on screen once again.

While Frank Marshall is set to produce the film with Mark L. Smith as the screenwriter, there is yet a director for the film says Universal.

And if you haven’t watched Twister, the original film followed Dr. Jo Harding (Helen Hunt), and a team of students that were preparing to test a new data-gathering device within a powerful tornado.

It has also not yet been confirmed if Helen Hunt will star again for the second movie.

Although Universal has not yet released any details about the new plot, Deadline has reported that the second film will focus on Dr. Jo Harding’s daughter who just so happens to have the same storm-chasing bug too.

Universal and Amblin hope to begin filming “Twisters” this spring in 2023 according to Deadline.