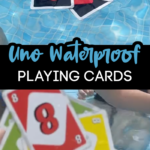 The competitive card game that sometimes ruins friendships and breaks family has created a water-resistant deck so you can play an everlasting game of UNO that only seems to end when the other players are in tears.

If you didn’t already know, the colorful card game also comes in a plastic, durable, and water-resistant edition conveniently placed in a “splash edition” box.

There’s even a carabiner included to keep all of your cards on one ring just incase they end up accidentally floating to sea or down the waterslide at the public pool.

Keep in mind that even though this deck of cards are made for the pool, the rules are the same and always remember, the creators of UNO say you cannot stack a “draw four” with a “draw two” or vis versa!

Although with that being said, lets just say that UNO has no idea that card play, is the oldest trick in the book and you can currently get the waterproof deck of cards on Amazon for $10!