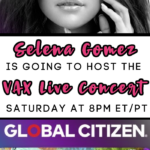 Set your reminders on your phone NOW.

It is almost time for the VAX Live Concert, and you don’t want to miss it!

It will be happening at 8pm ET/PT, and will be available to watch on several networks, as well as streaming on YouTube.

The VAX Live Concert — which will be hosted by Selena Gomez — will feature tons of amazing artists — actors, musicians, models, and other celebrities.

Prince Harry and Meghan, the Duke and Duchess of Sussex, are acting as campaign chairs — and if I had to bet, I bet they make an appearance.

This is going to be a campaign to make the world come together to help fight the coronavirus, one vaccine at a time.

That’s why we launched VAX LIVE: Rewards to Reunite the World — a campaign dedicated to overcome vaccine hesitancy in the US and globally and encourage people to take the vaccine as quickly as possible so we can get back to doing some of the things we’ve missed.

Just some of the performances you can catch during the VAX Live Concert are by Jennifer Lopez, H.E.R., J Balvin, The Foo Fighters, and –my favorite — Eddie Vedder.

There will also be appearances by Ben Affleck, Chrissy Teigen, Jimmy Kimmel, David Letterman, and more.

The hourlong special and vaccination campaign from Global Citizen celebrates health workers worldwide and advocates for equitable Covid-19 vaccine distribution to people around the globe.

Here is how to watch the VAX Live Concert

You can watch right from your television cable through ABC, CBS, and AXS TV — they will televise the show at 8pm ET/PT.

You can also stream it from YouTube TV and ABC News Live streaming at 8pm ET/PT.

If you want to LISTEN, but maybe don’t have time to watch, iHeart radio stations will carry the broadcast at 8 p.m. ET/PT.

AXS TV has announced plans for multiple replays through Monday.

Vax Live will air internationally on Albavision across Latin America, Multishow from Globo Group in Brazil, Caracol TV in Colombia, S3 in South Africa, Canal+ and MultiChoice across Africa, Sky in the UK, Network 10 in Australia, CSTAR (Canal+ Group) in France and on Insight TV globally.

Since YouTube is the event’s exclusive global streaming partner, you can catch an EXTENDED 90 minute version of the concert on YouTube.