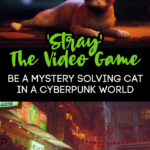 It seems like FOREVER ago, we told you about a little post-apocalyptic, cyberpunk video game that allows you to play and solve mysteries as a cat.

Well, my friend, it is officially available to purchase and play!!

Stray allows you to be an inconspicuous kitty, carrying a backpack and roaming a post-apocalyptic city ruled by robots.

Lost, alone and separated from family, a stray cat must untangle an ancient mystery to escape a long-forgotten city.

According to a blog post on the PlayStation site, Stray has been in the works for seven long years. You know there was some blood, sweat, and tears poured into this game!

Stray is a third-person cat adventure game set amidst the detailed, neon-lit alleys of a decaying cybercity and the murky environments of its seedy underbelly. Roam surroundings high and low, defend against unforeseen threats and solve the mysteries of this unwelcoming place inhabited by curious droids and dangerous creatures.

If you are a cat owner, you know the struggle of trying to control your fur baby. They do exactly what they want, exactly when they want to do it. There is no “making” them do anything.

I can only imagine how difficult it would be to try to mimic a cat’s behavior for a video game.

See the world through the eyes of a cat and interact with the environment in playful ways. Be stealthy, nimble, silly, and sometimes as annoying as possible with the strange inhabitants of this mysterious world.

When the creators went to create the game, they actually used cat videos — the ones we all know and love — as a reference.

All those hours of watching and recreating the cats in the videos paid off in a big way.

Not only does the cat act super realistic, but y’all have got to check out the graphics in this game. Ah-Mazing!!

Along the way, the cat befriends a small flying drone, known only as B-12. With the help of this newfound companion, the duo must find a way out.

This cyberpunk game was developed by Blue Twelve Studio, and this little company from France has totally outdone themselves with this game.

Stray is available for PC, PS4, PS5, and it’s also included for PlayStation Plus Extra and Premium members.

You can pick up Stray at the PlayStation website.