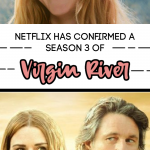 Are you a Virgin River super fan, like me?? I binge watched season 1, and now I’m trying to savor season 2, watching one episode per day.

It’s STILL going to be over too soon, BUT at least I can look forward to knowing that they are bringing a season 3 to Netflix. YAY!!

It’s hard NOT to fall in love with the residents of this fictional small town in Northern California.

Much like Sweet Magnolias, which is also on Netflix, the storyline and the characters are so great, you can’t help but be invested in their lives!

So, many speculated a new season of the show was coming — sources said, back in JULY, that the show was being renewed.

But, now we have official confirmation that the show will premier on the Netflix streaming platform.

We know that it is going to start filming sometime this year, but we don’t know WHEN the production on the new season will actually start.

I’m hoping they decide to start sooner, rather than later!! I need my Virgin River fix, AMIRITE?

If you haven’t yet started the series, head on over to netflix and start your binge watching.

See the trailer for season 2 of Virgin River below.

I loved the movie Virgin river. I am ready for season 3.