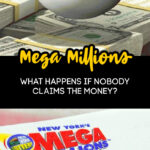 I’m not even afraid to admit it. I bought a Mega Millions lottery ticket when the winnings got to $1.337 billion.

That lucky person bought a ticket in Des Plaines, Illinois — but they have yet to come forward.

But, what happens if they DON’T come forward? Is there like a runner up, or something?

What Happens If Nobody Claims The Mega Millions Money?

I have good news, and I have bad news.

If nobody claims the Mega Millions jackpot, the money doesn’t go to a runner up.

The money also doesn’t go back into “The Pot” to be won by someone else.

What actually happens is that the money goes to education. Hence the title of “Education Lottery.”

Any prizes unclaimed after 12 months are returned to the Common School Fund to support kindergarten through twelfth grade education.

So see, it would actually be a good thing if the Mega Millions winner didn’t come forward.

I mean, it might not be so good for that person, but it would be wonderful for the area schools!!

Has Money Ever Gone Unclaimed In Lottery History?

If you can believe it, YES, winnings have indeed gone unclaimed.

According to Yahoo, there have been SEVERAL times that people have failed to claim their winnings.

And, these weren’t teeny tiny jackpots.

In Georgia, someone missed out on the $77 million Powerball ticket in 2011.

Some unlucky individual in New York missed out on $68 million in the Mega Millions drawing back in December 2002.

In September of 2002, a $51.7 million Powerball ticket sold in Indiana was never claimed.

Finally, there was a $46 million Mega Millions ticket purchased in New York in April 2006 that someone failed to claim.