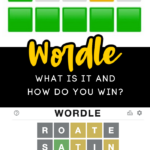 Have you fallen victim to the obsession that is Wordle?

Do you even know what I’m talking about?

Wordle has infiltrated the world of social media and technology, and it has taken many people hostage by its addictive and outright fun gameplay.

You are probably familiar with Wordle, even if you don’t know it.

Have you seen those social media posts that show you an image of what looks like a big box made up of colorful green, gray, and gold little boxes?

That, my friends, is Wordle.

In a brief few words, Wordle is a daily online word game that will give your brain a good workout.

Everyday there is a new puzzle posted on the site, and you have 6 tries to guess what word is the “word of the day.”

Now, I’m not really a wordsmith (Kind of oxymoronic that I’m a writer, right?). It might be easier for those who have a knack for letters and words.

Oh, don’t get me wrong, even if I suck at it, it’s still addicting as heck. I religiously log in each day to try and solve the Wordle of the day.

Sometimes, the entire family gets in on the Wordle action, helping me with words that match the colors of the puzzle.

How Do You Play Wordle?

So, the word is always FIVE letters.

Your first word is strictly a guess of ANY 5 letter word. It could literally be ANY word that is made up of 5 letters.

Tangy, Dance, Rump, Media, Matte, Haunt, Satin — you get the idea. ANY word in existence that is 5 letters — no more, no less.

After you put in your first word and hit “enter,” Wordle will tell you which letters you got wrong, right, or kind of right.

What do I mean?

The blocks will turn GRAY if you got the letter wrong. That letter is NOWHERE in the “word of the day.”

The blocks will turn GREEN if you got the letter exactly correct. Not only did you get that letter right, but it is in the correct spot for the “word of the day.”

If the letter you chose is included in the “word of the day,” but you guessed it in the wrong spot, the block will turn GOLD.

It’s a game of knowing your words and having a strategy.

You could totally lose a couple hours playing this game — ADDICTING!

What Are Some Tips For Wordle?

First of all, know there isn’t a time limit. You have all the time you need to think through letters and words. TAKE YOUR TIME!

Next, you want to start with a word that doesn’t repeat letters (like woods, signs, or kinky). Get the most out of all those blank spaces that you can.

To maximize the value of your opening gambit, choose a word with three vowels and five different letters. Some examples: orate, media, radio.

If you ask expert programmer and game designer, Tyler Glaiel, he will tell you that mathematically, the BEST first word to use in Wordle is — stop reading if you don’t want to know it — ROATE.

He got all technical, and used a bot to play the game until it came up with the best first word. BUT, now that you know the word, it will make guessing the Wordle “word of the day” so much easier!

Also, the Wordle guesses will ALWAYS be common words. There are no funky scrabble words up in here — nobody’s got time for that!

There are also GUESSES and SOLUTIONS. Just because you guess a word — like Roate — doesn’t mean that it will EVER be the final Worlde “word of the day.” It isn’t common enough.

Have I thoroughly confused you? LOL!!

The good news is that there is a keyboard at the bottom of the screen that keeps track of your letters, so you can use that to help you think up words.

Can I See An Example Of Wordle In Action?

Sure. I’m here to please!

This is the WORDLE that I did today (I am posting this the following day, so the answer will be different).

I took the advice of Mr. Glaiel, and started with the word ROATE.

From this, I can see that I got 2 letters correct, but they are in the wrong position.

I guessed SATIN. I made sure to use “A” and “T,” but I put them in a different location.

From that word, I found out that the “A” was in the correct spot, and I added “N” to my list of correct letters.

Now, based on strategy (perhaps from playing way too much Sudoku), I realized that the “T” now had to go in either the first or the last place.

The “A” was still in the correct spot, but “N” and “T” were in the wrong positions.

I now knew without a doubt that “T” went in the first spot, so I had to think of words that started with “TA” and contained an “N.”

So, I now knew that “TAN” and “Y” were correct. What the heck word could THAT be?

Here is where my fifth grader jumped in and said, “What about ‘TANGY?'”

So we guessed the right word in 5 guesses!!

Now it’s YOUR turn. Go to the Wordle website, and get to guessing the “word of today!”