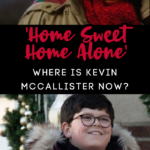 It looks like Kevin McCallister has used his past shenanigans to figure out his future career.

Home Sweet Home Alone, the “remix” to the classic Christmas series of Home Alone starring Macaulay Culkin, tells us what Kevin McCallister has been doing all of these years after being left home alone not once, but twice.

In the Home Alone series we know that a young Kevin McCallister is left alone twice after his frazzled parents leave him behind to go on vacation.

The original holiday series putting eight-year-old Kevin up against two criminals named Harry and Marv, defends the family household with homemade contraptions and sticky traps which apparently, has also inspired his career choice.

Due to a misunderstanding between Max and married couple Jeff (Rob Delaney) and Pam McKenzie (Ellie Kemper), the unwelcome visitors set up the plot that leads to holiday hijinks when Pam and Jeff to try snag a priceless heirloom inside the Mercer family home.

Alongside Max’s handmade booby traps, protecting the Mercer household shown in the film is a McCallister Security home alarm system posted in the front yard, that the now 40-year-old adult Kevin McCallister is presumed to own.

While Kevin doesn’t appear in the movie his brother Buzz does; now a police officer, when Officer McCallister receives a second phone call about a minor accidentally left home alone for the holidays, Buzz tells dispatch to ignore what he presumes to be a “prank call.”

“When I was a kid, my family went on vacation. We forgot my little brother Kevin,” Officer McCallister says into his radio. “Twice. He called in the 289 to mess with me. The idiot does it every year.”

Streaming now on Disney+, you can watch Home Sweet Home Alone for the holidays!