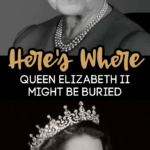 And since her passing, there have been a lot of questions spiraling around the world including where the Queen will be laid to rest.

After Prince Philip died in April of last year at the age of 99, he was placed in the Royal Vault beneath St George’s Chapel at Windsor Castlem, but this is not his final resting place.

Prince Philip will now be moved since Queen Elizabeth has passed, and the two royals will most likely be laid to rest in the King George VI memorial chapel in Windsor alongside her sister Princess Margaret and her parents.

Although some reports have suggested that the queen and Prince Philip’s resting place might be on the grounds of Frogmore House on the Windsor Estate.

However, it is possible that a special mausoleum could be built for both Queen Elizabeth and Prince Philip similarly to Queen Victoria and Prince Albert.

And keeping with royal tradition, the queen will also be placed in a lead-lined coffin.