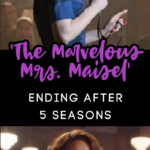 If you haven’t binge watched The Marvelous Mrs. Maisel (Amazon Prime Video), you are missing out! It’s not a show for the littles, but the adults will love it!!

This show, which was created by Amy Sherman-Palladino — the brains behind Gilmore Girls — follows Miriam “Midge” Maisel during the height of the 1950s.

We’ve all heard about the 1950s. Women were supposed to act and think a certain way. But, that isn’t the way that Midge decided to go.

Instead of conforming to the role of a wealthy 1950s housewife, Midge decides to pursue a career in stand-up comedy.

The Marvelous Mrs. Maisel has a very loyal following, and has won award after award — from Emmys, to Screen Actors Guild Awards, to Critics’ Choice Awards.

Why Is The Marvelous Mrs. Maisel Coming To An End?

But, why would a show, which has such a strong following, decide to call it quits after a mere five seasons?

The plain and simple answer? The story has come to a complete end.

No need to let it linger well past its storyline, like some shows (I’m looking at YOU, Grey’s Anatomy!).

“We have an idea emotionally where we want the Midge character to end — We don’t know exactly how long it’s going to take.”

Dan Palladino in a 2019 interview

Not only did they clearly know when they wanted to end the show, they had a formula going into every season.

The first year was her discovery, the second year things unravel, the third season she goes on tour. Amazon … had already heard the bullet points for what the seasons were going to be.

What Does Rachel Brosnahan — Midge — Feel About The Marvelous Mrs. Maisel Coming To An End?

On February 17, Rachel Brosnahan posted to Instagram, letting everyone know that they had started working on the fifth and final season of The Marvelous Mrs. Maisel.

A few days ago we started shooting Season 5 (!) of The Marvelous Mrs Maisel. It’s bittersweet. The band is back together again and we can’t wait to share season 4 with you starting tomorrow…it’s also going to be our last rodeo. Rest assured our tits are up and it’s going to be a hell of a final chapter. Stay tuned.

Production is currently underway on the final season of The Marvelous Mrs. Maisel. For those keeping track, that means we have about 16 more episodes before we have to say ‘Adieu.’

This is pretty bittersweet, because the show is so amazing! But, I can’t wait to see what happens to Midge in the final season, and how they decide to finish the show.

You can see a trailer for the fourth season of The Marvelous Mrs. Maisel below.