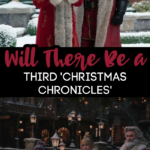 Kurt Russell has played Ol’ Saint Nick for two consecutive Christmas’ in a row, making families believe in the magic of Santa and giving us all a belly laugh or two during the holiday season.

Since the holidays are now considered right around the corner once spooky season comes to a close, everyone who believes in Mr. Claus is anticipating, rather hoping, for a third Christmas Chronicles film.

While the first featured Kate (Darby Camp) and Teddy (Judah Lewis), the siblings go on a wild adventure to catch Santa and unexpectedly, they do, after accidentally crashing Santa’s sleigh, it’s up to the sibling duo to help save Christmas to deliver the presents on time.

Considering a third movie of the holiday season staple hasn’t officially been announced, Kurt Russell did hint that he would be open to a third movie in an interview with the New York Times.

While there is hope for a third Christmas Chronicles movie, unfortunately it doesn’t look like the movie will release this year, if there is a so-called third film on the way.

Since the first and second film were two years apart, our guess is that the third movie might be introduced two years after the second one was released, which would put us sometime near the holiday season of 2022.

However, both Christmas Chronicles films are available to watch on Netflix!