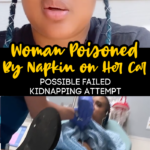 Man the world just keeps getting darker and darker, at this point, I feel like I am always looking over my shoulder because I just don’t trust people.

A woman named Erin Mims in Houston, Texas was just hospitalized after being poisoned!

She had been out at a restaurant having dinner to celebrate her birthday, afterward, when she went to her car there was a napkin shoved into the handle area.

Erin said she really didn’t think too much about it and she threw the napkin away.

I just threw it out. I opened the door with the tips of my fingers. I asked my husband, did you put a napkin in the door? And he said no.

She went back into the restaurant to wash her hands after throwing the napkin away and went back to the car.

Suddenly her fingers started getting tingly and quickly got worse to the point that she felt like she couldn’t really breathe.

Maybe five minutes, my whole arm started tingling and feeling numb. I couldn’t breathe. I started getting hot flashes, my chest was hurting, my heart was beating really fast.

At the hospital she had blood tests done, urine samples taken, and even a CAT scan, doctors said that her vitals were all over the place.

The doctor came in, and told me it wasn’t enough in my system to determine what it was, but said it was acute poisoning from an unknown substance.

According to a poison expert, her symptoms could have been caused by hundreds of different toxins and they just couldn’t tell exactly what the substance was that poisoned her.

Although the Houston Police Department said this is the first case they have heard about anything like this, the treating doctor said it sounded like a failed kidnapping attempt and that is freaking scary!