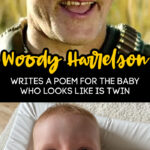 I am dying right now. This baby LEGIT looks just like Woody Harrelson, and I’m not the only one who thinks so.

Besides hundreds of thousands of people on Twitter thinking this baby looks just like the famous actor, Woody, himself, sees the resemblance.

Dani Grier Mulvenna, the baby’s mom, posted the photo on Twitter, and it quickly went viral.

Ok but how does our daughter look like Woody Harreslon?

You have to admit, this kid could totally be Woody’s baby!! She looks just like him!

Basically, we never saw the resemblance until our friend Chris pointed it out at a BBQ. Then once we took that photo of her laughing it was undeniable.

I bet Dani was FLOORED when Woody Harrelson took to the comments to voice his opinion on the matter.

He even Tweeted a poem to his twin, baby Cora, and then posted it on his own Instagram!

That’s pretty amazing!! Not only do they have a baby that looks just like Woody Harrelson when she laughs, they have the coolest story and Tweet to share with Cora as she grows.