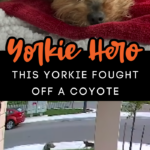 I love stories about superhero dogs, and this one comes in a pint-sized package — and I love it!!

Lily Kwan and her tiny Yorkie live in a residential area of Toronto, a neighborhood where they aren’t used to traumatic events occuring on the street out in front of the houses.

Lily had seen the signs around town about coyotes coming into the neighborhood, but she never thought she’d actually come face-to-face with the vicious wild dogs.

This particular day, Lily was out walking her dog, Macy, down the street, when a wild coyote caught their scent and started chasing them.

At first, Lily started running as fast as she could away from the coyote while holding Macy’s leash with the little doggo in tow.

Eventually, she had to drop the leash, run, and scream to try to get someone to come to her aid. Unfortunately, nobody heard her, and the coyote started to attack little Macy.

Lily ran up to the houses, rang the doorbells, and tried to find someone — anyone — who could help them.

She couldn’t find ANYONE home!!

Now, while Lily was desperately trying to track down some help, little Macy turned on the coyote, and started to attack the wild dog — this courageous pup wasn’t going to let the coyote attack her human and she wasn’t going to go down without a fight!

FINALLY, Lily was able to find a good samaritan who let her into safety.

And little Macy? Well, she continued to stand up to the coyote until it ran off in a different direction!!

Macy did have to get rushed to the vet for emergency surgery on some of the wounds that she sustained during the coyote fight.

But, the story has a GREAT ending, because Macy is now home and expected to make a full recovery.

She kept the coyote away from Lily, saving her life, and lived to be the hero of the family!

She’s a super brave dog; I love her so much. I just thought, this tiny dog could protect this huge human being, trying to fight off this huge coyote.

The event was captured on a home surveillance video, and you can see part of the incident HERE.