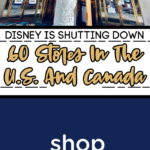 The most magical store(s) on Earth are planning to close down.

The Disney Store, the most magical place to shop in as a kid (and an adult), is planning to shut down a handful of stores across the U.S. and Canada.

Disney has said that they plan on closing at least 60 stores in North America which equals to about 35% of its locations.

This, is heartbreaking to hear.

Even with the devastating news regarding Disney’s brick and mortar stores, there is a bright light at the end of the tunnel!

Disney says that they plan to pivot and focus more on its e-commerce shop due to the shift in shopping from the global pandemic.

“While consumer behavior has shifted toward online shopping, the global pandemic has changed what consumers expect from a retailer,” said Stephanie Young, president of Disney’s consumer products, games and publishing unit, in a press release.

Disney plans to make their shopDisney online store, a more “seamless” and “personalized” experience for costumers in the future.

So far, Disney has yet to release the list of stores that are closing from the 300 shops they hold worldwide, but my best advice is to keep an eye on the nearest Disney store near you for any noticeable changes.